Ever wondered why the output of your favourite UNIX/Linux commands is still displayed in black-and-white after all these years?

Ever had to search back through your scroll-buffer in search of gcc errors and salient information to tell you what went wrong with your program's execution?

acoc is a regular expression based colour formatter for programs that display output on the command-line. It works as a wrapper around the target program, executing it and capturing the stdout stream. Optionally, stderr can be redirected to stdout, so that it, too, can be manipulated.

acoc then applies matching rules to patterns in the output and applies colour sets to those matches. A picture is worth a thousand words, so look at the sample screenshots in the next section. 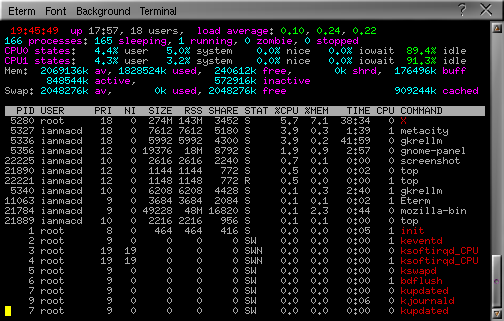 Building an RPM with rpmbuild 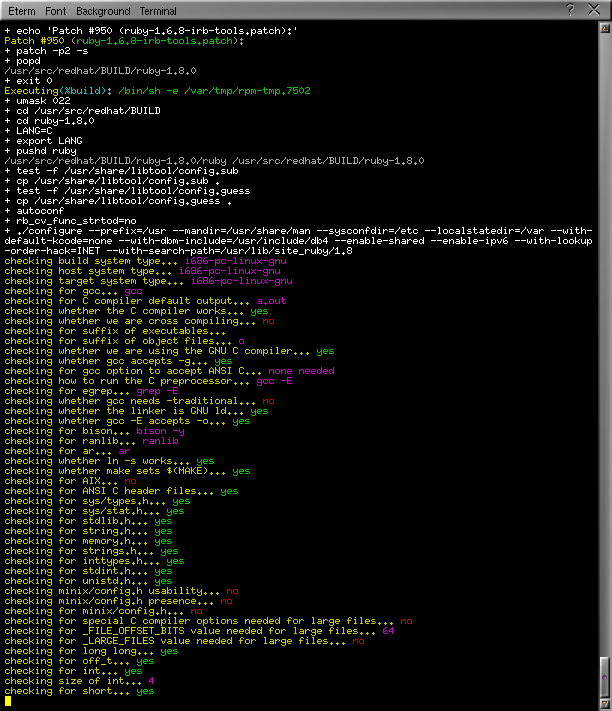 acoc has just one absolute prerequisite (other than Ruby itself, of course), namely Florian Frank's Term::ANSIColor module.

If you don't want to go to the trouble of fetching and installing Term::ANSIColor yourself, you'll be happy to know that the acoc package includes a copy for your convenience.

Another library you might care to install is Masahiro Tomita's Ruby/TPty library to allocate pseudo-terminals in order to fool those programs that behave differently if their stdout stream is not connected to a tty.

Whilst Ruby/TPty is not mandatory (acoc will detect its absence), its installation is recommended in order to increase the transparency of acoc's operation.

Blank lines and those that begin with a # are ignored.

A program configuration stanza is introduced as follows:

The square brackets are mandatory literal characters. Alternatively, the @ symbol may be used, to allow [ and ] to retain their usual semantics in program specs comprising a regular expression:

program_spec is defined as one or more instances of the following component, separated by a comma:

where invocation consists of the program's name (not including its directory path component) plus any initial arguments.

Alternatively, invocation may be a regular expression, which can be used to match multiple programs and/or command-line arguments in arbitrary order. Regular expressions are automatically anchored to the beginning of the command line.

flags, if present, is separated from 'invocation' by a slash and consists of one or more of the following characters:

Some programs, such as ls(1), behave differently when their stdout is not connected to a tty. Use of this option will fool the target program into believing it is outputting to a tty, rather than a pipe to acoc.

Use of this flag requires Masahiro Tomita's Ruby/TPty library to be installed. Otherwise, the flag is silently ignored.

Note that the pseudo-terminal communication enabled by this flag is one-way only, from the target program to acoc. It is thus not possible to use acoc in combination with interactive programs, such as the interactive Ruby interpreter (irb).

t
apply colour formatting even if stdout is not a tty. By default, formatting is not applied if the output stream is not attached to a terminal.

Here's an example of a line that introduces a configuration stanza:

which says to apply the following rules to the rpm and rpmbuild commands, attempt to apply all matching rules, and also apply those rules to the programs' stderr stream.

This says to allocate a pseudo-terminal to ls(1), fooling it into believing that its output is being sent to a regular terminal instead of a pipe to acoc.

With this flag, the effect will be this:

Without it, ls will detect that its stdout is connected to a pipe and behave accordingly:

This says that the rules that follow should be applied to all invocations of diff(1) and rcsdiff(1), as well as those invocations of cvs(1) and p4 that are followed by the argument diff.

Additionally, colouring should be applied even when stdout is not connected to a tty, so that the colours still show up when the output is displayed in a pager such as more(1) or less(1).

In this example, the ps(1) command will be matched, as long as the e and f options are both passed in either order.

An alternative way to write the above spec is:

There are two things to note in this alternative:

If this were placed in ~/.acoc.conf, it would remove any matching rules that had been installed for the diff command by either /etc/acoc.conf or /usr/local/etc/acoc.conf.

After defining the program name and operational flags, matching rules can be defined. These take the following form:

g
find every match on the line, not just the first. When using this flag, 'regex' should not include parentheses.

Except when using the g flag, each component of the regex that you wish to colour should be placed in parentheses. Text outside parentheses will be used for matching, but will not be coloured.

For example, examine the following:

This will match a line that starts with more or one digits, followed by the string foo and any amount of white space, followed by one or more word characters. However, only the initial group of digits and the group of word characters will be coloured. The string foo and the white space that follows it will be used for matching, but will not be coloured.

Separated from the regex by white space is the colour_spec. Usually, you will include in this as many colours (separated by commas) as you have parenthesised expressions in the regex. However, it's also permissible to have fewer. If, for example, you have three parenthesised expressions in the regex, but only two colours listed in the colour_spec, then the second colour will be used for colouring both the second and third matches.

If you have more colours listed in the colour_spec than there are parenthesised expressions in the regex, the surplus colours are ignored.

When using the g flag to perform a global match on the line, you may list as many colours as you want. The same rules apply here. If there are more matches than colours, the remaining matches will be coloured using the last colour listed. Surplus colours are ignored.

acoc is only as good as the configuration file that it uses. If you compose pattern-matching rules that you think would be useful to other people, please send them to me for inclusion in a subsequent release.